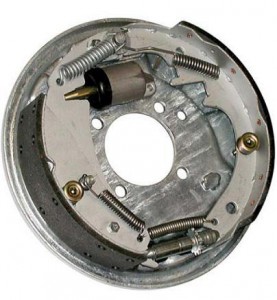 A drum brake shoe has a rim providing a lining support plate, the rim edges being formed with projections and recesses on either side of a center section. The width of the rim is substantially constant throughout the majority of its arcuate length. The arrangement permits the stamping of nested rim blanks, each blank extending transversely across a sheet, with approximately 25 percent less material used than would be the case if the rims were made of full constant width to support the entire brake lining. The brake lining is attached to the outer surface of the rim and is directly supported by the rim center section and the projections extending laterally therefrom. The lining is unsupported in the areas where it extends over the recesses. The projections and recesses may be generally rectangular or curvilinear.

What is claimed is: